I was recently puzzled by flaky tests in Mutiny.

Still, the logs would hint at tasks being rejected by terminated Java executors, so I started digging. I went through the usage of executors in tests, but aside from a few trivial fixes, all executors were being used as they should be, as in:

I then started tracking calls to shutdown() and shutdownNow(), to try and see if we had some code, somewhere, that would shut an executor down. Nothing in tests, but I eventually found a call to shutdown in that class from the JDK:

This class is used by… Executors.newSingleThreadExecutor()!

So if you create an executor using newSingleThreadExecutor(), then the actual executor is being wrapped in a class whose sole purpose is to call shutdown() in a finalizer.

See the first paragraph of the documentation of the (now-deprecated!) Object.finalize() method:

Called by the garbage collector on an object when garbage collection determines that there are no more references to the object. A subclass overrides the finalize method to dispose of system resources or to perform other cleanup.

It is to be expected that in a constrained environment such as that of a CI/CD runner, the garbage collector has to run more frequently than on a 32Gb of RAM laptop. Depending on how your code is written, you may end up in cases where an executor gets finalized before it has received all tasks and they get rejected.

The fix, and a bit of caution

In the case of Mutiny tests flakiness was greatly reduced by replacing calls of:

Indeed newSingleThreadExecutor() is the sole method that wraps executors with FinalizableDelegatedExecutorService.

Now should you do the same to your code base and ditch newSingleThreadExecutor()?

I don’t think so! 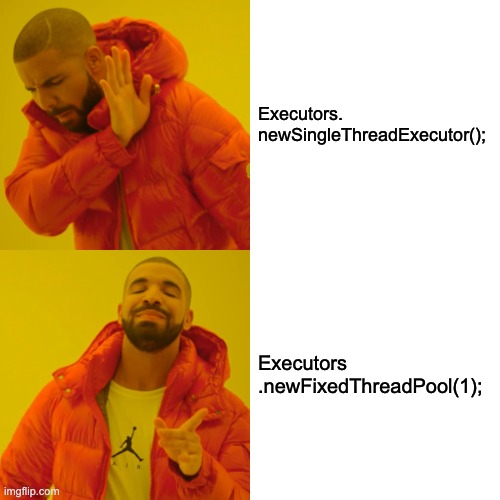