The Java Reactive Streams APIs have been part of the JDK since Java 9.

It is about time for the modern Java ecosystem to migrate away from the legacy APIs (org.reactivestreams:reactive-streams Maven coordinates) and adopt the interfaces in java.util.concurrent.Flow.

I have recently started migrating the Mutiny and Mutiny Zero libraries and thought these notes would be useful to others as well.

The good news is that the legacy and the Flow APIs are isomorphic. For instance org.reactivestreams.Publisher<T> becomes java.util.concurrent.Flow.Publisher<T>.

One option is to perform string replacements to move from one API to the other, but an IDE like IntelliJ can help you with API migrations (see Refactor > Migrate Packages and Classes): 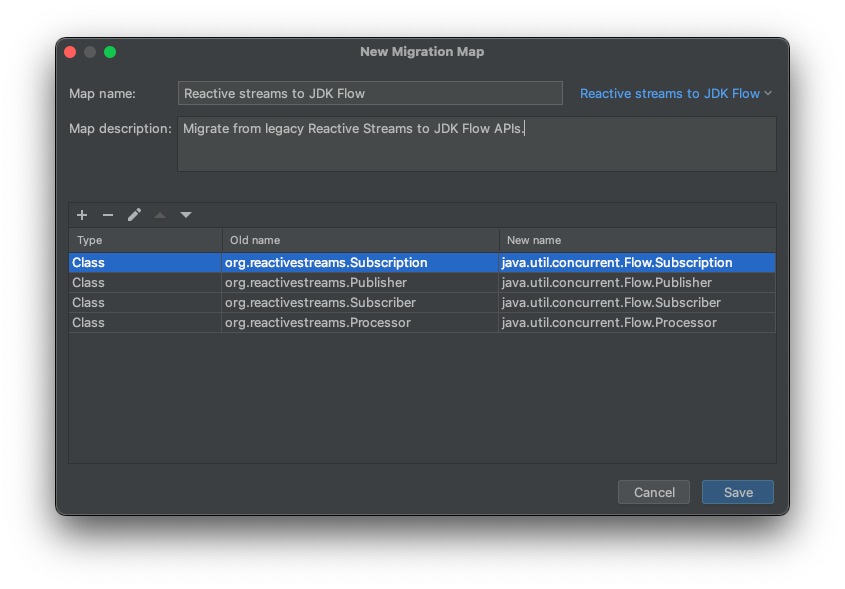 The bad news is that moving from one API to the other could be a breaking change for your own code bases.

The reactive-streams-jvm project contains adapters to go back and forth from legacy types to Flow types.

You might as well use the adapters that I developed and maintain as part of Mutiny Zero.

Suppose that you have a library that has yet to migrate to Flow APIs. You can easily turn a Publisher<T> into a Flow.Publisher<T>:

Type adapters exist for the 4 interfaces of Reactive Streams, and they have virtually no cost.

There is fortunately a Flow variant of the TCK, so if you have implemented Reactive Streams the changes will be minimal as you transition to Flow.

The rest of your TCK test code will be the same, except that some method names have Flow in them: createPublisher(long) becomes createFlowPublisher(long), etc. You can see that in one of the test cases from Mutiny Zero.

Migrating to the JDK Flow APIs is important for the modern Java ecosystem, especially as Reactive Streams APIs have been part of the JDK since Java 9.

The migration is fairly transparent for application developers as they are unlikely to be directly using the low-level Reactive Streams types. This is instead the duty of frameworks, libraries and drivers to do this transition and impose one less dependency in application stacks.

The migration in itself isn’t too hard to perform as types are isomorphic, but there is an inevitable transition period for stacks where multiple dependencies need to be aligned past Java 8 and on top of the JDK Flow APIs. Type adapters represent a virtually no-cost solution when alignment is not possible yet.